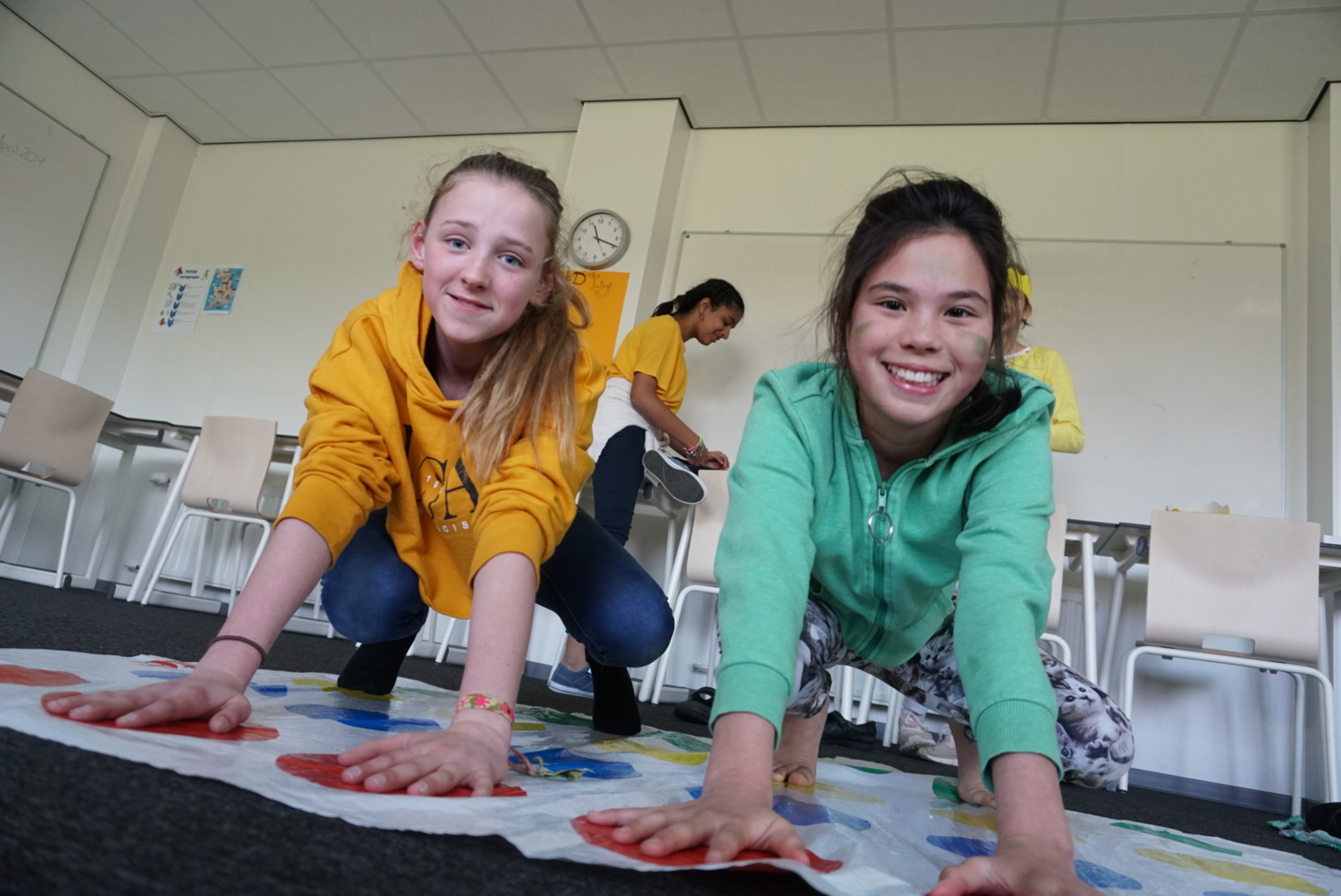 How the BSN Character Profile supports our ‘one school’ philosophy

How to bring our shared values to life

How can we bring the students of one school, divided over multiple campuses, together? How can we make sure that we instil the same values in all students? These were some of the questions that led to the development of the BSN Character Profile.

Deciding on a set of values that we wanted our students to have and uphold was the easiest part of bringing the school together. The greater challenge was how to embed such values within the life of the school.

This blog explains why the British School in The Netherlands needed the Character Profile and how it has quickly embedded in teaching and learning. It has become a successful and popular tool across the BSN.

Why the BSN needed a BSN Character Profile

The BSN comprises two senior schools and three junior schools and Central Services, the Language Centre and the International Leadership Academy. We have four different sites, approximately 700 members of staff and 2,400+ students. Each school has its own distinct identity and degree of autonomy, which is a positive thing. But, historically, this had resulted in some differences with each school using different learner-type profiles. If we were to be truly one school, we needed to align.

Shared values are not a purely academic exercise

We can describe the shared values on the website, and we can put up posters, hold an assembly and occasionally quote them. But, if no one really thinks about the Character Profile or engages with the values, it can seem a wasted, one-time, purely academic exercise. How can we ensure that students, parents and staff truly adopt these values?

Following a long process of research and work by a cross-school team, the solution we eventually came to was to personify each value. The team created a set of visual characters that would appeal to students from an early age and act as a handy visual explanation. 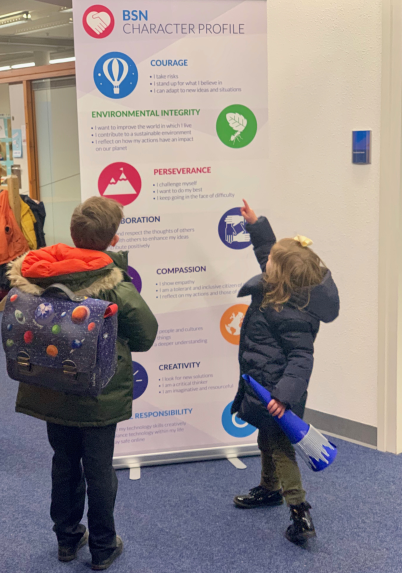 The Character Profile coming to life with Junior School children

What is a character profile?

A character profile is most often used in fiction, storytelling and video. It is a detailed description of a fictional character’s life and personality. A good character profile helps the character come alive for their audience. The BSN wanted all students to develop characteristics and habits according to the BSN shared values that will help them succeed in life. And so, the BSN character profile was created.

The Character Profile consists of eight aspirational attributes, characteristics or values that the BSN wishes to foster in our students from a young age. These are:

We believe that these qualities will help students develop as well-rounded individuals who are equipped for the future. To care for themselves, each other and the world and adopt high standards and make a positive contribution to society.

“ I often hear my children compliment each other for their perseverance, creativity or curiosity or they describe characters in stories using this language.” 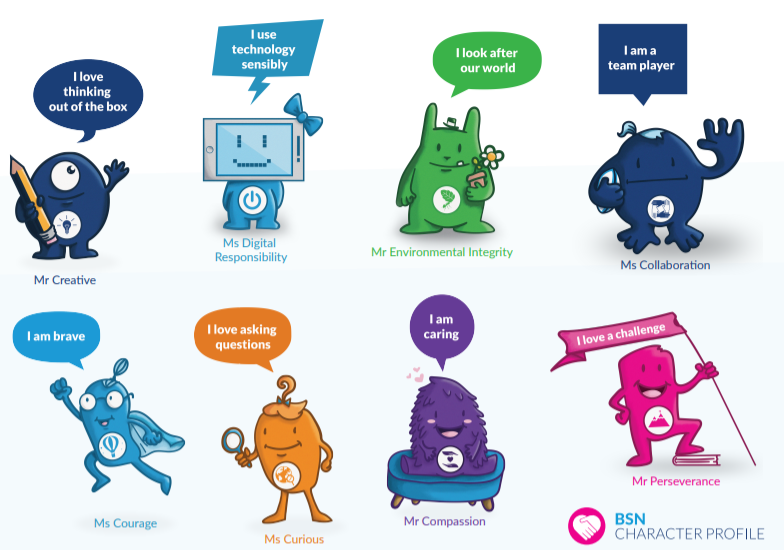 Applying the profile across school and learning

The Character Profile has starred in lessons, assemblies, multiple displays across all the school sites, parental engagement and information evenings, web pages, periodical magazines, musical performances and end of year student reports. It has even inspired the creation of costumes and cuddly toys.

In both Junior and Senior Schools, the Character Profile is used. On the Senior Campuses, the visual description is adjusted to the age. 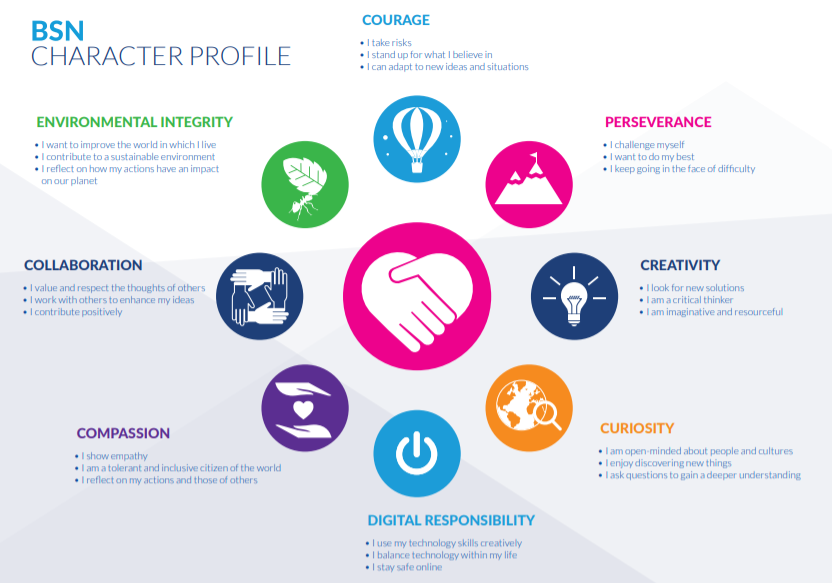 The BSN Character Profile as used in Senior Schools

Of course, the character profile only works when it is embedded in learning and teaching. Even more so, for it to work, children must understand and feel empowered by the characteristics. As a parent of two junior school students noticed, the children have adopted the Character Profile completely.

“The way that the BSN has embedded the 8 Character Profiles into the curriculum and language used in the classrooms has fully captured my children’s imaginations and has shaped their awareness of their own behaviour.  I often hear my children compliment each other for their perseverance, creativity, or curiosity or describe characters in stories using this language (sometimes even debating things like, ‘are you really courageous if at first, you feel scared?’). It’s evident that these profiles are not just words but concepts that they have internalised.”

Success lies in the teamwork

The Character Profile’s creation: Mr Jonathan Clarke, Project Lead and Deputy Headteacher at Junior School Leidschenveen, conducted a year’s worth of research before bringing together a knowledgeable and enthusiastic team.

This team included staff from across all the schools and the BSN’s Communications Team. The overall aim was that every single pupil, student, and staff member within the BSN and our parent community would know, recognise and embody the new character profiles. These would be a set of shared values.

Many people were involved in advice, support and information gathering across the four original campuses leading up to the invention of the Character Profile. Since then, many others who have been integral in its delivery and promotion. Without all these people, there is no way that the Character Profile could have been launched and gone on to be as successful as it has been and continues to be. 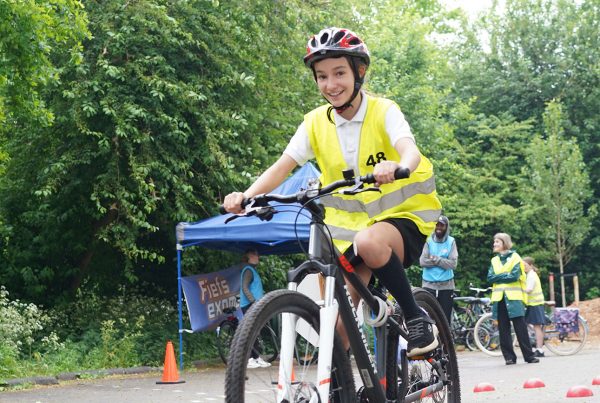 Three Tips and Tricks to Stay Safe on the Road 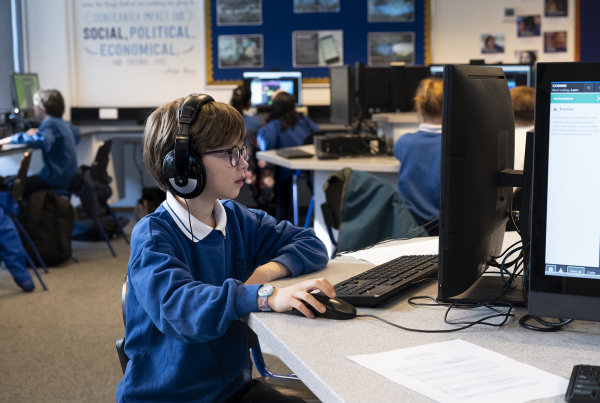 How to Support Your Child to Stay Safe Online