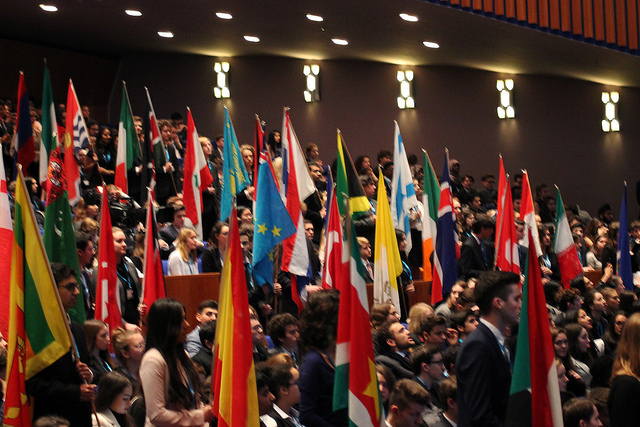 What Model United Nations teaches students that lessons never could

The Importance of being globally aware :

MUN – so much more than just a school club

You may have clicked on this Article having never heard of MUN before. So here is a short summary:

MUN stands for Model United Nations, it is a replica of the United Nations. MUN was created in 1945, shortly after the UN was created. Why? It was created in order to enable young people to be more involved in politics, as well as for people have an awareness of the situations in our world. Furthermore, MUN also allows students to work together to find solutions to several problems which our world faces.

We wanted to write about MUN because it is not like any other extra-curricular activity we have ever done. Not only does it allow teenagers to get involved with global issues and broaden their mindset, it also nourishes students in a way that just can’t be done in lessons, helping them to acquire public speaking skills as well as the ability to cooperate with others.

Only having attended a few conferences, we thought our opinions and experiences, did not do MUN just. So we got in touch with our BSN MUN leadership team. Aditya and Rebecca kindly answered a few of our questions.

Do you guys want to explain what MUN is for someone who has never heard of it before?

Aditya : The name MUN stands for Model United Nations, which is meant to be a replica of the actual United  Nations in which we have conferences. Usually about one day long, two days long, or three days long depending  to which conference you go to, and in them students ranging from about 13 – 14 years old way up to 18 – 19 years old, pose as delegates of countries which they do not belong to, so that they can debate foreign policy and come to a –

Rebecca : Resolution, you try to solve an issue and you work together rather than trying to like win, in MUN you don’t really have a winner ; you are working together to find solutions to issues.

How long have you guys been part of MUN?

Rebecca : I think I started when I was in year eight or year seven.

Aditya : I started when I was in year seven, so that’s about six years now.

What made you join?

Rebecca : Well, actually my sister did it, so I was really inclined to do it, and I think everyone in my year did it. It was a very, it was just something that everyone did, but also I think it was more about what made me stay, which was the idea of how it was just such an interesting community, of being with people your own age that are interested in the same topics that you are ; and it was quite interesting to play like saving the world basically.

Aditya : For me there are many reasons. As Rebecca said the joining part was inconsequently because the friends were doing it and it was a big thing in our school, but the staying part, well firstly it was that you get to debate issues that plague the world today, something that you don’t do regularly with our friends or in school or in society. So this is where we learn about how the world works. Secondly, it’s about making connections with people around the world, like Rebecca said, where you get to know people who have similar interests, but more than that, you stay in touch with them later on in life.

What skills did you acquire that you are most proud of?

Aditya : I think for me it would be to break out of my shell and to have the confidence to speak my mind when I feel like it’s right.

Rebecca : I think that there is so much you can take from MUN even if you are not someone who is interested in international politics, and it definitely breeds the idea of being more confident, but also just the ability to talk about anything at any point even if you have very little information on it, because you just grow, you become quite confident as a speaker, but also you become increasingly more aware of foreign policies of different countries, and so you become much more comfortable with like voicing your opinion even if it’s a topic that you may not be like involved in.

Aditya : Just adding to the point that Rebecca said. We had mentioned that confidence is important, something that we’ve learnt, in addition to being able to voice your opinions whenever  you feel that you have something to say. But in addition to that, I would say that listening is an important skill that that we learn at MUN as well. The majority of the conference you’re not going to be speaking you’re going to be listening, absorbing, thinking about how you can contribute to what others have said.

MUN has the debating side to it. But I remember from last meeting you were talking about cooperating with each other. Do you want to talk a bit more about that? Since that’s a really interesting aspect that many people seem to misunderstand.

Rebecca : I think that the biggest difference between MUN and a debate is, well apart from the fact that you aren’t actually supposed to Debate in MUN, a lot of people probably do , when they try to pick out flaws in other people arguments, but in MUN you work towards creating a resolution, writing up your solutions to the given issues. It’s about working together with other people. I believe MUN should be incorporated in different school curriculums around the world because It really teaches you how to work with people who have drastically different opinions to yours, even if those are not your real opinions. [you are given a delegation before the conference that you represent, you represent the delegations interests not you own]

Say you’re the USA and you have to somehow find a solution with North Korea to a certain issue, It really makes people think about the other side.

Do you plan to further continue with politics in more depth after school?

Aditya : MUN I s not just about politics or staying in a field where you debate world issues. It’s about having an awareness and having the confidence to tackle any issues that you face in life.[…] These skills that I’ve learnt in MUN will stay with me my entire life.

Rebecca : I had an MUN advisor when I was younger who had said that with MUN, you have to do something about the issues. We can’t just sit and talk about them and then not really do anything about it. That was really impactful for me and encouraged me to get involved with NGO’s and I’m currently involved with an NGO that addresses issues that are talked about at the United Nations at the moment. And I will always want to continue working with this NGO and other NGOs. While this is not going to be my major at University I it is my minor and I can continue to work with these issues.

That’s really cool, cause what I’ve noticed when you try to explain what MUN is to other people, they assume you’re very into politics and you want to do that for the rest of your life, which certainly isn’t a bad thing. But MUN gives you such a wide range of skills that you can apply to whatever you want to do later in life, really.

Aditya : If I can give an example: when we do presentations in class I can truly see that with people who do MUN their presentations are much better, much more articulate than the presentations of others. So these things apply to school, they apply to your social life, they apply to many other categories, and it would be a mistake to think that MUN is only for the politicians.

Can you sum up MUN in three words?

Rebecca : Do you want to say one then I say one?

Aditya : Yeah sure That would give us more time to think. Let’s say, an Experience.

Aditya : It’s quite hard actually, do you want to go with your last one, if you have one?

Cooperation and Communication, even with people who have drastically different opinions to your own, is key to a more peaceful future.

Speaking when you have something to say is so important. If you are not able to voice your opinion or ideas, the others will never know of it.

Listening people disregard as an actual skill until they realise they lack it.

Action is needed for you to make an impact. No matter how old you are, you should be able to get involved with issues that matter to you.

Awareness of Global issues is becoming increasingly important in our global and interconnected community. How does one form their own pinions without understanding the issues? How does one take action without having their own opinion?

Written by Alysha and Ezinma